Not too many things I hate worse than....

A freakin' stuck seatpost!
However it's probably one of the best upper body & core workouts you'll ever, ever come across. Memorial Day I spent cleaning & tuning up all the bikes. I finally got an offset seatpost for the Trek Top Fuel 9.9 (Ebay is pretty good for stuff like that -- first time I ever bought something on a single bid and there was no other bidders and $40 for a $200 item is a pretty good feeling).

Anyways, how stuck can a seatpost of a 6 week old bike be might you ask? It rivaled just about any post I've ever come across with the exception of the one situation that ended up destroying my old Trek Fuel 100 bike. It took two hours of complete brute force with all the tricks of the "seatpost removal" trade.

Funny part should be the fact that I used Carbon seatpost compound when I installed it which is supposed to minimize problems with seatpost removal. Don't always assume it will, but also I may have applied more than the situation called for and that perhaps could have caused the problem.

Fortunately it's done, removed and the new one installed. Now if I can get this fixed... 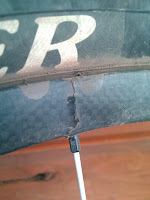