You never know what you might find when you run a "Google".
Any of you that have ever missed getting into the Chequamegon Fat Tire Fest and tried out your literary skills in the "50 ways" Essay -- read the fine print. Your essay become full property of the Chequamegon. Where it goes from there, one can only guess....

Thanks, Gary!
Posted by Aaron Swanson at 9:41 AM No comments:

It's quite a haul to get to the Iceman MTB race in Traverse City,MI -- but there's some amazing redeeming qualities to that event that make it worth the drive.
A quick recap with more later.
--For all the hoopla about the questionable weather going in, the rainshowers and/or snow held off other than scattered rain or snow pellets of precipitation.
--The race has a "wave" format instead of a mass start like Ore to Shore & Cheq 40. Great idea considering the quality & general width of the trails and single track. By the time our Pro race started at 2:30, despite a thousand or so previous racers, the trail held together, maybe soft in a few spots but no mud to speak of.
--I think whether you're in the pro start or any other the course is incredibly fast. Note, I DID NOT say easy, it's just fast. Winding 4 wheeler & ski trails with some forest road and single track tossed in.
--I didn't feel necessarily intimidated lining up with the best in the business, and held with the main group of 20 for several miles into the race, even climbing a space or two. It would get stretched and slightly come back together, but with each stretch the distance got further to Matter, Bishop and company to the front. I don't think it's insanely fast how they start... it's insanely fast the pace they continue at.
--After 20 minutes my legs just didn't stay "opened up". Many times I can shift into that 5th gear, but again like last week I felt stuck in 4th and the heart rate monitor showed I down a few beats from where I should be as well.
--From that point it made for an interesting race with a few highlights and a few more low lights -- more on that later but wound up crossing the finish line in 1:44, just a mere 17 minutes behind Jeremiah Bishop, the winner. Congrats to some good efforts by Brian Matter (2nd place I believe), Marko Lalonde (8th or 13th I think, he beat Sam Shultz but lost to the other brother Andy by 9 secs), Chris Peariso (10th) and Mike Phillips (12th) - guesses from the conversations I had but it should be pretty close.
Posted by Aaron Swanson at 6:16 AM No comments:

Unbelievably, I'm going to make it into the third leg of the Midwest's MTB racing Triple Crown, the ICEMAN -- on a whim last night, after I'd pretty much ruled out getting in after not scoring entry via the lottery system and not winning any Ebay entry transfers. I thought to drop the Iceman contact person a brief email, on the infinitesimal chance with just 5 days to go before the race, that perhaps I could gain entry. Low & behold the answer came back, due to an unfilled entry, in the affirmative!

All I got to say is ....Thank you Jesse Lalonde -- sorry for the broken shoulder, bud, and the fact you won't be able to race & use your entry -- I'll do my best serve as your impersonator,... that is without all the tatoos.... & I guess I'll be using multiple gears, derauillers, etc. & maybe even two different sized wheels. And the results... well, let's just wait til Saturday afternoon before any podium posing gets started.
Posted by Aaron Swanson at 6:52 PM No comments:

This past weekends Red Barn CX race didn't end up being the challenging course I was wishfully anticipating. But my funk shouldn't bring down what was otherwise a great event enjoyed by a great many others with a big turnout (approx 200 racers)and post Halloween costume festivities.
A cyclo-cross course that traversed sections of a christmas tree farm, that made the occasional jump out to a gravel road, and some dirt trails. What it lacked in a smooth flow, it made up for in straightaways and sharp corners. 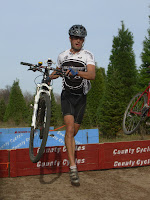 Arriving late to the course from some misdirections (note - Google maps on MN cycling federation get you to the city, not the site unfortunately) from Northern Wisconsin, I got in a short warmup before heading up to the startline. Nice big group of 40+ in the A race (Cat 1,2 & Masters) -- wide starting line created the need for the big group to whittle down quickly as the course narrowed within a few hundred yards. I settled in somewhere in front third may have been higher prior to be shuffled into a tree.
Alot of times there's some interesting race dynamics to share, but this course and the playout of the race didn't make for alot. The first 3 laps where pretty hard, riding the Gary Fisher SuperFly with 1.75" Bont Dry X's -- I had a breeze with the cornering but the straightaways & lack of other terrain made for a much harder effort to stick with the really skinny tire boys.
I remember coming through seeing the 7 laps to go sign & hoping somehow things would get more interesting. The mid laps had about a half dozen riders, including Harry Anderson of Duluth get by me, however a group of two other racers (Chris "push him out of tree" Smith & Jake "stormtrooper" Helmbrecht) caught up with me it proved to be group that stuck together. Eventually recatching a number a riders that had passed me after lap 3 and only Brian Koeneman of those stuck with us. For the longest time John Thompson hung out there just infront of us, but hats off to the guy as he held us off for the last 3 or 4 laps.
It wasn't a race that I had a good drive for -- mishaps or problem areas came up. An early lap hard remount angled my seat up, a dropped chain on the next to final lap, a slide out in a corner and one christmas tree that attacked me leaving me bruised and bloody were part of it. But mostly I couldn't get into the groove of the course. I take absolutely nothing away from the likes of others that enjoyed it, I'm happy for them. I just found it to be alittle... well, boring. And I don't think I've ever said that about a race course. It had almost zero ripples to the terrain. Yes, it had one run up area but no rollers or hills to speak of. The corners are always up to a race designers layout, but it often felt somewhat like being stuck in rushhour traffic with stoplights that are always on red every couple blocks. Which after awhile I was wondering the sense of pushing hard throughout if the gaps were going to close on the corners anyways?
I've certainly had better races and placed ahead of riders much higher on the list today, but among other things I couldn't uncork that 5th & final gear that's helped me most of the season. The added drag of the MTB was most noticeable for a course like this. Which brings up the interesting dynamics of how different cycles handle different terrain. So, Red Barn with it's smooth course -- stick with the skinny's.
Beautiful weather, sunny & warm couldn't have been a better day. Got back to Ashland in time for a birthday party and was left to comtemplate going to Milaca's 'cross race on Sunday....

Posted by Aaron Swanson at 5:50 PM No comments: