Right up my alley… I mean dirt road..

Can’t help but love it.  Feeling the groove of the SuperFly & putting on the new Quarq physics to work Sunday 4/29… New Auburn, WI

First race of the season.

Posted by Aaron Swanson at 11:43 PM No comments:

So let’s see where are we these days..…  busted tooth & crown that costs that of a ‘cross bike (dangit!), major wattage increases, and sick every other week… it all ain’t making much sense but it’s appears to be working.  Coach Gordy must be pulling rainbows out of my butt.

So after being a long time PowerTap user, I made the leap over to another power meter device – adding it to the line up.  The Quarq S2275 MTB Power meter… hey, look if it’s good enough for Julian, Jose & Jaroslav, why don’t I give it a try?

I wanted to try a power measuring device for both MTB racing & Cyclocross racing that didn’t involve wheels and a bikes rotating weight.   The crankset based Quark power meter weighs in very competitively with their non powermeter cranksets.  So thanks to many efforts of Whitey at The Ski Hut I’m giving it a go!  Looking forward to it. 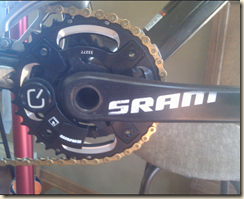 Also recently, I had the need & opportunity to deck out an old bike with all new drive train parts.  Don’t think I’ve ever done a full replacement before.   Considering my 2012 MTB is on backorder and may not be in til June it was sorta necessary.  So the ‘08 Gary Fisher Superfly took on a new look… along with the 39/26 Quark chainrings/crankset, I trying out a KMC chain, with new Shimano XT 10 speed derailleur, rear shifter & cassette… From a 3x9, to a 2x10.  It wasn’t bad before but now it feels like new!  I like the 2x10 but for gravel & fire lane roads, just a slightly bigger chainring would be nice.  But considering even the best in the country only use a 39 chainring on single track it should be plenty adequate for that application.