Benefits of racing ‘cross thru January…

…I’m not doing hours & hours of long base training rides outside in the single digits, sub zero temps & windchill.  I’m soooooo not missing that.

Chilling out for the remainder of the month of January and not feeling bad that I’m taking time off the bike… priceless.

Posted by Aaron Swanson at 6:35 AM No comments:

…found the biggest baddest cats in the cyclocross world and ran with ‘em thru frozen ruts, mud, slop and tears this past weekend at the US National Cyclocross Championships

Can’t begin to say enough about how much fun the weekend was regardless of how the racing went.  Madison/Verona WI played host to 5 days of almost non stop cyclocross racing.

I raced both Saturday & Sunday --  in a master category and then the Elite/Pro race.  Each  day had it’s highlights & low lights.

Certainly some of the most challenging conditions I’ve ever had to ride in for the entire length of a race.  Sat’s 10am masters race had the pleasure/displeasure of racing through frozen mud ruts in the early laps of the 6 laps race that eventually began to melt into gooey mud in the last laps as the temperatures heated up.

Plan to better recap things later, in both races I deemed a success in that I progressed up from where my call up starting positions were, but the between the size of the race fields and the course conditions, the further you started in the back it made for all that much more carnage to work around & slowed you to move up.

I gotta toss out a bunch of big thank you’s to my support that I got on Saturday, and the many shouts from many friends on Sunday.  When there are thousands of people lining the course and in every section there’s someone yelling your name & urging you on it’s a super cool feeling.  Thank you to every one of you that was out there!  I hope the show was worth it.  Once in awhile I’d get a chance to look up from the treacherous ground to see your face & give a smile of thanks.  Never underestimate how much your cheers help.  Whether it was you guys from the U.P. Cross, friends from North, or many others I’ve connected with through Mt Biking and Cross racing the past several years – thanks again it was really appreciated.

Thanks to the my coach Gordy Paulson, who’s been a great guy to work with this past year and who’s keen sense of what’s needed (and not needed) for training  even made it possible to arrive in reasonable racing shape after 12 long months of training & racing.  And lastly to The Ski Hut for the great support this past season in my cyclocross efforts, much appreciation out to those guys!

Here’s a couple pictures from Chris Schmidt but check just run a google search and it’ll yield a ton of videos and other pictures from the weekend. 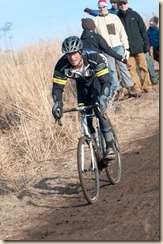 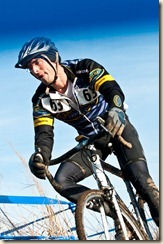 Posted by Aaron Swanson at 1:49 PM No comments:

..after a pre & post Christmas fitness slump from a nasty stomach flu, my energy level and some fresher legs showed up on the bike yesterday for the first time in 2 weeks.

Might just have a decent go of things this Saturday & Sunday at Cyclo-Cross Nationals.  Really appreciate all the well wishes from so many people this past week about participating in Nationals.  I’ll be doing the Cat 1/2/3 40-44 Age group Championship race on Saturday at 10am, then with enough motivation I should give Sunday’s Championship race of Pro/Cat 1/2 at 2:15 a go as well.

Just my luck that the two largest fields of participants are in both those races.  For good or bad --  a large part of the final outcome in these races with fields that big will come down to luck & good fortune… and the call up.   The benefit and bane of any race with large numbers of participants.

So how does the “call up” work?   Well, someones gotta be the first on the start line and someone has to be in the back.  My guess is they will have rows of 8 racers wide, with 95+ participants in Saturdays race that’ll make for 12+ rows.  They base your starting position on an interesting but relatively complex formula that if you’re an engineer, accountant or other kinda number-head you might find it interesting.  Long story short, you’re granted points based on races you’ve done during the Cyclo-cross season.  But only races that participate in & play by the rules of the USA cycling program.  I skimmed through the guidelines but wanna say they take the 3 best of those races.  Good thing I at least did the 2 Badger Cross races & a MN ‘cross race.

Looks like I’ll be starting in 54 position on Saturday (even if I nail down 3rd overall at the Midwest Regional masters championship race…nice eh?) , and 89th on Sunday…. so 7 rows back & 12 rows back, nothing like a good challenge..   I’m confident however that my ending placement should be better than my starting place.

There’s really not too many good alternatives to this method, but it does force a rider to chase point races during the season.  And someone not having that geographical benefit of being able to do so it puts that rider at a disadvantage.

Narrowing it down to smaller fields with a qualifying race(s) would be a nice option.  I think anything more than 30 or 40 participants in a race of 45minutes to an hour on a course that is no wider than 10-15 feet, gives all those participants a reasonable chance.  Bigger fields than that & you could be the lance armstrong of cyclo-cross and starting in the rear you still couldn’t catch the front by the end of the race due to the traffic & volume of racers.

So Saturday, I’m going to be giving it my best and let the chips fall where they may.  Maybe I’ve got good legs, maybe I don’t – hopefully I’ve got a good story or two when it’s all over.

Sounds like a lot of friends and fans are going to be there!!  That may be one of the best parts about it.  Friends from up north are coming down to watch, a bunch from the UPCross scene, along with friends & fellow racers.  That’s going to be super awesome about the weekend just having such a big crowd of people cheering, yelling and screaming.  If you don’t get down there, go to the USA Cycling or some other websites and watch the live streaming coverage of the Elite Races on Sunday.  The weather is forecasted to be reasonably warm and good conditions, it’s gonna be a great time!!

Posted by Aaron Swanson at 11:49 PM No comments: